The school’s purpose is twofold: to provide a positive learning environment for children, and to demonstrate the advantages of some simple and inexpensive architectural design decisions. To this end, we’ve set some additional goals, including: a flexible floorplan that can be built in phases and altered if necessary, a simple method of construction, the reduction of the length of the outer fence/wall, better natural ventilation, and the use of innovative construction techniques that complement current local building methods. 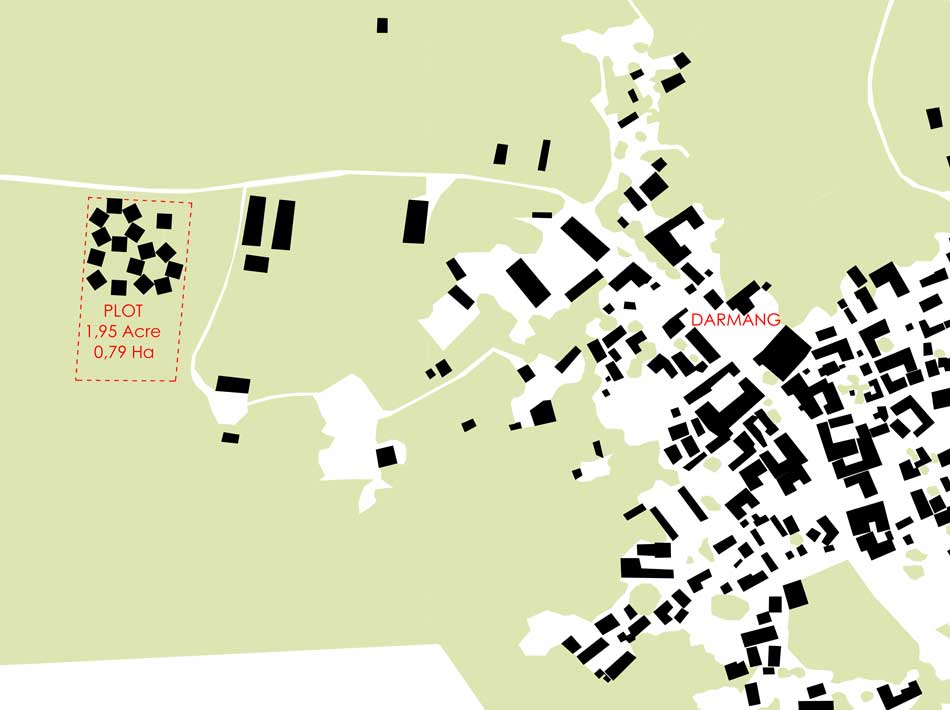 The site area is pretty big, with around 2 acres, and after the school’s completion it should be able to provide for around 500 kids. The finished complex will consist of 15 identical 7x7m units, grouped to form three inner courtyards corresponding to three phases of construction. These three clusters will house, respectively, the kindergarten/nursery, the primary school and the secondary school. This layout, which departs from the usual longitudinal school design common in most African countries, is meant to create an atmosphere more similar to that of a small town, allowing children to experience a different environment and sense of scale. A variety of different spaces is created – from small corners where kids can “hide” to the big open courtyards. 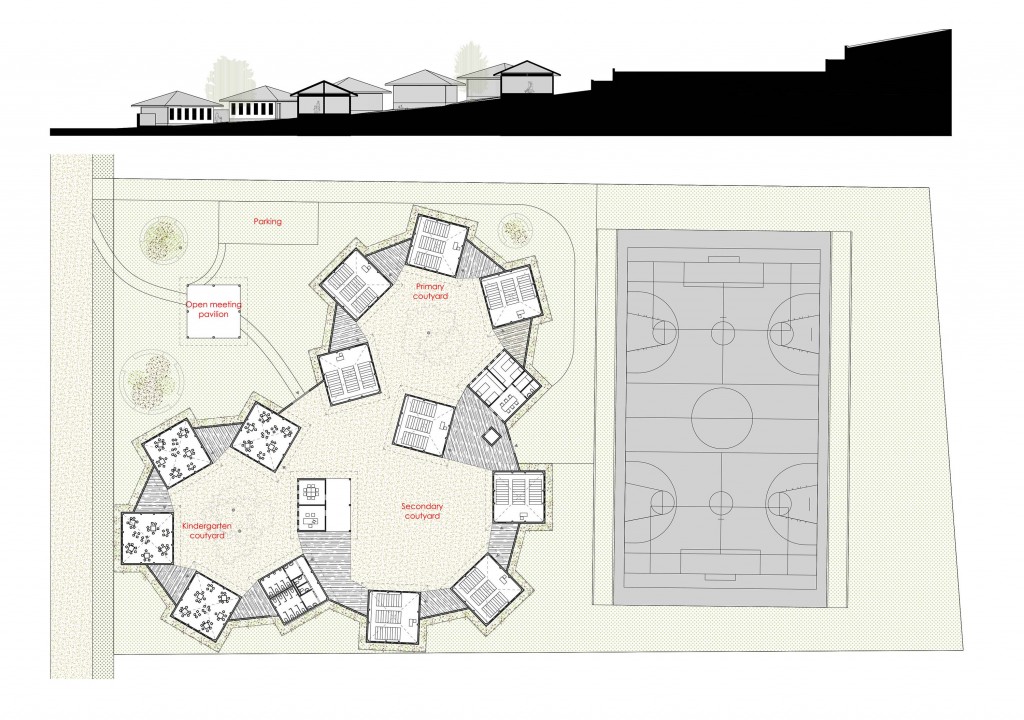 The placement on the plot

The complex is to be built on sloped terrain and because the incline is lower closer to the road we’ve decided to do all the construction in the first half of the plot. This will make the construction of the school complex much cheaper and easier. The further south we go – roughly at the half mark – the slope gets steeper (around 17%) and any construction above that point would require much more digging together with stronger and deeper foundations. Once the school complex construction is finalized, we plan to build a small football court in the upper part. It will require some digging, but with a system of terraces we can get a manageable situation. In order to avoid using conventional means of foundations which would be pretty expensive, we suggest a system of earth-bags filled with soil dug out on site, that immediately serve as a foundation wall. This system would require a little bit of maintenance every year after the rainy period, but in general shouldn’t cost much.

Fragmentation of the school facilities

The complex will consist of 15 identical units, rotated under different angles. Each unit is done in the same way, using the same technology and materials. At this point there is no proper survey plan and the terrain slope has been calculated using very simple methods. That’s why these smaller units positioned in a relatively free layout are ideal. They can adjust to the slope much better than a bigger building and all the irregularities and mistakes that happen during construction will be much easier to cover. The decision to make all the units identical will also streamline construction, allowing local workers to master new techniques through repetition. We expect that after the first few units are built, most of the construction problems and questions will be resolved, allowing the rest of the complex to be done much faster. It would also allow us as architects to fine-tune certain details as the construcion goes along.

We thought about the way to minimize the amount of outer fence walls since they serve no other purpose besides security reasons. On the other hand they need proper foundations and a lot of time and resources to get built. In order to minimize these expenses we decided to use the school units as parts of the outer wall where the fence part of the wall only gets built between the units. The parts of the classrooms that are facing outside would have fixed window to prevent entry.A rough estimate shows that a normal wall going around the whole plot perimeter would be around 260 meters long, while the one we’re proposing is only 95.

With the whole complext divided into smaller units, it becomes possible to achieve higher flexibility. Buildings can get constructed in phases according to the funds available and the whole floorplan can adjust to future needs much easier. Our plan is to start off with the construction of the early childhood center that consists of six units around an inner courtyard (five classrooms plus a lavatory unit) accommodating around 150 kids aged 3-5. In the second phase we’ll be adding the primary school for kids aged 6-11 and raising the total number of students to 420. Six more units are to be built around a second courtyard in this phase – 5 classrooms and a volunteers unit, while one frist phase classroom gets transoformed to an office unit. The project will be finalized in the third phase, with the addition of the final 3 units forming the third courtyard. These final three classrooms will host the secondary school for students aged 12-14 and the school would reach its full capacity of 560.Within the same concept, according to the future needs of the school, it is also possible to have a unit or two more or to simply leave a piece of the plot empty for future construction needs.